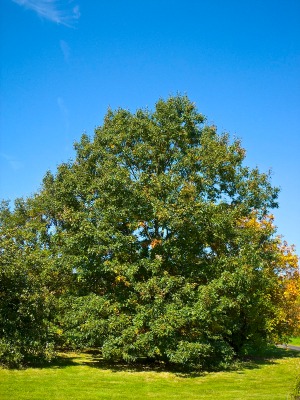 Black oaks may face many threats from climate change in the coming years. Photo: Willow, Wikimedia Commons (CC BY 2.5)

The survival of some species of oaks, among them black oak, have been threatened as forested areas in North America are cleared for agriculture, urban development, and other forms of development.  It is a major goal of many forest managers to maintain current populations of oak (Quercus spp.) for timber, wildlife, and conservation biology. Currently, black oak is distributed throughout the eastern half of the United States.

From observations and modeling systems, it is postulated that:

Black oak (Quercus velutina Lam) is a common, medium-sized to large oak in the Eastern and Midwestern United States.  Although black oak grows best on moist, rich, well-drained soils, it is often found on poor, dry sandy soils, where it grows for up to two hundred years.  Black oak provides acorns, which are an important source of forage for wildlife such as bears, squirrels, deer, and woodpeckers. They were an important of part of Native American diets.

The range of oak savannas in the Midwest have decreased dramatically due to a number of human-caused factors. Fire suppression in the region limited oak regeneration and facilitated the transition of many oak savannas to closed-canopy stands (Peterson and Reich 2001). These alterations to oak savannas make them a priority for restoration and conservation efforts in the Midwest.

Before European settlement, oak savanna covered more than 20 million acres. By 1985, 113 sites containing black oaks remained in the Midwest (Nuzzo 1986, Nature Conservancy 2011).  The Kankakee Sands Conservation site on the northern Indiana/Illinois border is an ecosystem that is administered by the Nature Conservancy (Iverson et al. 2009).  Spanning about 23,000 acres, the site offers a mix of meadows, prairies and black oak stands, which have survived in undisturbed areas.  The main goal of the Kankakee Sands Conservation site is to preserve one of the best examples of a black oak sand savanna in the Midwest (The Nature Conservancy 2011).

A pressing question for natural resource managers and conservationists in the region centers around how climate change will impact black oak survival. There will be a significant change in Midwest climate, which will include rising average temperatures, longer growing seasons, shorter winters, and more severe storms, floods, and droughts. To help managers plan and understand expected changes in black oak populations in the Midwestern United States, researchers looked at several climate change models to evaluate likely temperature, soil, and precipitation conditions for the region in the coming future. 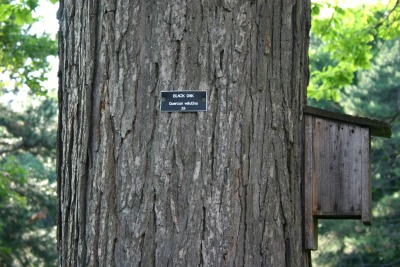 Oaks and other hardwoods are declining in the United States, in part because of land development and fire suppression. Oak savanna ecosystems in the Midwest are among those most threatened (Considine 2009, Nuzzo 1986, The Nature Conservancy 2011). Oaks are undergoing a regeneration crisis in the absence of fire (or other processes) that partially open the canopy (Iverson et al. 2009). In much of the United States, the exclusion of fire has caused oak savannas to convert to closed canopy stands. This limited its suitability as habitat for some species, such as the red-headed woodpecker (Melanerpes erythrophalus), in part by reducing the presence of black oak.

Black oak is well-adapted to periodic fire.  A relatively thick-barked species, it is moderately resistant to damage and topkill from fires. The presence of fire helped black oak become the dominant species in some areas, as it periodically opened the canopy.  Without fire, black oak is outcompeted by more shade-tolerant species.  Managers have found that periodic prescribed burns result in higher densities of black oak. However, multiple fires in a short time period (for example, 5 fires in 8 years) can weaken root-stocks and reduce black oak density.

While black oak is the dominant tree species in the sand savannas, it often grows in conjunction with other oaks, including white oak (Q. alba), northern pin oak (Q. ellipsoidalius) and bur oak (Q. macrocarpa) (Anderson et al. 1999). These oak species also represent important components of oak savannas in the Midwest, and also have ranges that will be impacted by changes in climate. 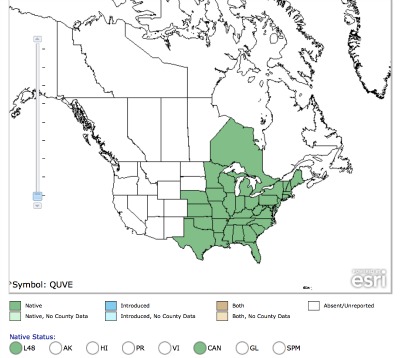 A USDA distribution map for the black oak in North America.

For tree species information, Forestry Inventory and Analysis data was used to look at habitat characteristics for existing oak stands. To statistically model current species abundance in relation to the environment, 38 environmental variables (7 climate, 9 soil classes, 12 soil characteristics, 5 landscape and fragmentation variables, and 5 elevation variables) were used in a model known as the DISTRIB model.

The DISTRIB model does not consider biological or disturbance factors that influence species distributions.  After a literature review, researchers came up with 9 biological and 12 disturbance modification factors (MODFAC) that influence oak regeneration, seeding survival, and longevity. They incorporated these factors into the original DISTRIB model. These factors considered species’ responses to disturbances such as drought, disease, fire, invasive species, temperature, and floods.

To determine the migration potential of a species in the next 100 years, researchers developed a model known as SHIFT. This model calculates colonization potential depending on:
• Abundance of species
• Distances between current habitat and potential habitat
• Quality of habitat
• Fragmented nature of landscape

The outputs from DISTRIB, MODFAC, and SHIFT are combined for more precise prediction.

Climate change will likely affect habitats of wildlife due to increase in temperature, precipitation, invasive plants, pests and diseases. Black oak (Q. velutina) could gradually migrate northwards and to higher elevations, while being replaced by white oaks and other plants. Increases in temperature will cause more frequent and hotter fires that can inhibit black oak resurgence and survival. Black oak may be affected by diseases and successive defoliations by gypsy moth.

Conservation efforts can help preserve and increase the current population of black oaks. Red-headed woodpecker survival may be affected in a habitat without a mix of trees (black oaks) and grassland.

The use of this method of modeling is useful for land managers and land owners who must address an uncertain future given various climate change scenarios. While this approach may not apply to every ecosystem, it does highlight some variables that should be considered when modeling for climate change, such as changes in natural disturbance regimes, ecosystem components of current habitat, and habitat fragmentation.

Such modeling techniques can help provide guidance as to what components of a given ecosystem or area will be most impacted by changes in temperature and precipitation.  It can also help with monitoring plans as it can help identify what ecosystem variables should be monitored, such as specific invasive species, fire frequency and intensity, when considering how the black oaks will change in distribution as climate changes.

Additional information about climate associated shifts in tree species and maps showing current suitable habitat maps and future habitat maps can be found in the Atlas of Climate Change Risk.

Map comparison of Black Oak (Quercus velutina) for current conditions and for 2050 under the Hadley global circulation model, B1 emissions scenario.