Effective use of trees and shrubs as a windbreak and area screen.

People go to great lengths to conserve energy in this era of tight budgets and environmental awareness. However, many do not realize that the simple act of planting trees and windbreaks can result in energy savings. Planting windbreaks is one of the best ways to saving energy with trees and shrubs. 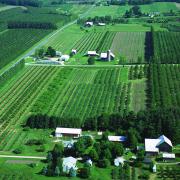 Slowing the wind with a windbreak also increases the boundary layer of warm or cool air near a building, thus reducing energy loss. The outside of a heated house in winter is slightly warmer than its surroundings due to a layer of still air near the building called a bounder layer. Wind sweeps away this warmer layer of air which causes warmth to move out through the walls and windows, which again gets swept away by the wind. The opposite happens in summer with air conditioned buildings.

Windbreaks for energy conservation must be designed and placed to slow wind around the structure you are interested in. Effective windbreak trees have crowns that extend to the ground and branches that keep their foliage in winter (coniferous or evergreens). Junipers, spruces, firs, Douglas-fir, and evergreen shrubs are good choices for wind protection. Deciduous trees and shrubs, and especially those with low, dense branches, reduce the wind to some extent, even in the winter, but evergreens are still the backbone of the windbreak. Species selection for a windbreak should consider the hardiness zone, soil moisture availability, and other soil characteristics like pH where the windbreak is to be planted.

Windbreaks for winter wind reduction should be planted upwind of the building to be protected based on prevailing wind direction in winter. This usually will mean planting on the west, northwest, and north sides of a building. However, local conditions like mountain ranges may cause prevailing winter winds to be from other directions. To slow winds and reduce energy loss in summer when air conditioning, windbreaks should be planted upwind of the building based on prevailing wind direction in the hot part of the summer, which will often be from the south. To fully protect a building from energy loss you may need windbreaks nearly all the way around it, but completely surrounding a building with windbreaks can cause air stagnation which can be uncomfortable on hot summer days.

Windbreak trees can be planted in straight or curved rows or in linear groupings. They should be close enough together so their crown edges meet within a few years without overcrowding. Small or narrow-crowned trees can be as close as six to eight feet while larger trees can be as far as fifteen feet apart. Shrubs can be planted as close as two to four feet apart. Windbreaks can consist of one or two dense rows or several less-dense rows. Wind protection extends downwind ten to twenty times the windbreak height, so the trees need not be planted close to dwellings to be effective. Snow drifting will be the worst at two to three times the windbreak height downwind. Driveways that need to go through a windbreak generally should go through at right angles to the prevailing winter wind direction to avoid having a hole that will decrease windbreak effectiveness. However, this may cause the driveway to be blocked by drifting snow. An alternative is to avoid penetrating the windbreak with a driveway at all, possibly by having it enter the property from the leeward side. 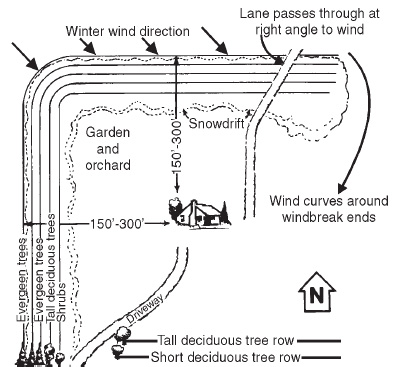 Both deciduous and evergreen trees and shrubs in windbreaks (as well as those outside of windbreaks) save energy in summer by directly cooling the air. This cooling happens as water evaporates from the leaf surfaces, much as our skin is cooled when we perspire. Thus the area with the windbreak will have cooler air temperatures, reducing the temperature difference between the inside and the outside of the building and reducing energy used for air conditioning.

Shade from trees reduces air conditioning needs and makes non-air conditioned homes more comfortable. Plant deciduous trees so they will shade east-facing walls and windows from 7 to 11 a.m. and west-facing surfaces from 3 to 7 p.m. during June, July, and August. Trees with mature heights of at least 25 feet should be planted 10 to 20 feet east and west of the house. Plant smaller deciduous or evergreen trees with lower limbs northwest and northeast of the building to provide late afternoon and early morning shade. Figure adapted from Kansas State University Extension Bulletin C-645.

Trees planted to the southeast, south, or southwest will only shade a building in the summer if they extend out over the roof. In the winter, when maximum sun is desired, such trees will provide too much shade. Even deciduous trees that have dropped their leaves cast quite a bit of shade in the winter. 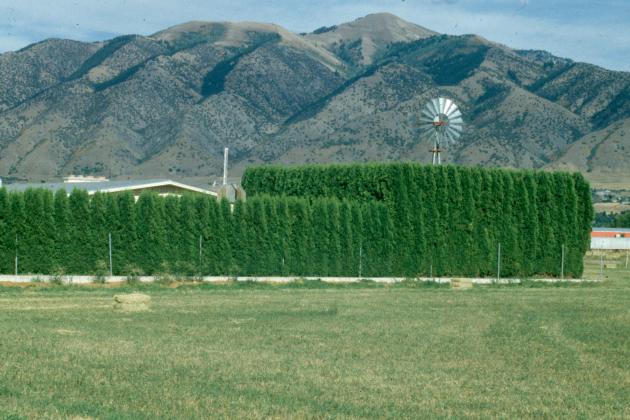 Trees should also be planted to shade paved areas. Light energy striking dark pavement like asphalt is absorbed, causing the air above to be heated. Light colored pavement absorbs less energy, but can reflect it toward a building. Tree leaves reduce heat and reflection as they absorb light energy and use it to evaporate water.

Trees also can reduce energy used for air conditioning by shading the building, which keeps it from heating up, and by shading the air conditioning unit itself, making it run more efficiently. In the arid West, however, people often use swamp coolers or evaporative coolers, and shading them will actually make them less efficient. Regardless, windbreaks usually won’t be planted close enough to a building to provide much shade for it.