Urban heat island effect over a city relative to buildings and greenspaces with trees.

Concentrated development in urban areas can create an “island” of heat surrounded by a “sea” of cooler rural areas. This is called the urban heat island. Buildings, asphalt, and concrete absorb solar energy, thus resulting in the emission of long-wave radiation that heats the atmosphere (air) in cities. Cities also use large amounts of energy, and emit this energy as waste heat, adding to the urban heat island effect.

The urban heat island is an effect of urbanization in forested or farmland regions, causing the temperature in urban areas to be higher than the surrounding rural areas. This is especially true during calm and cloudless nights. Figure 1 is a schematic of a heat island profile for a city, illustrating temperature differences as you migrate from the rural periphery, peaking in the city center. In desert environments, cities planted with urban forests can result in an opposite phenomenon of creating an “urban oasis” effect. 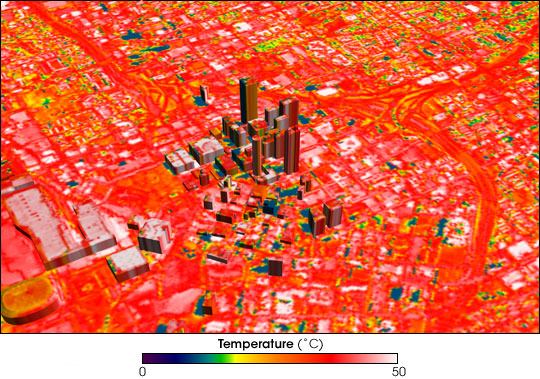