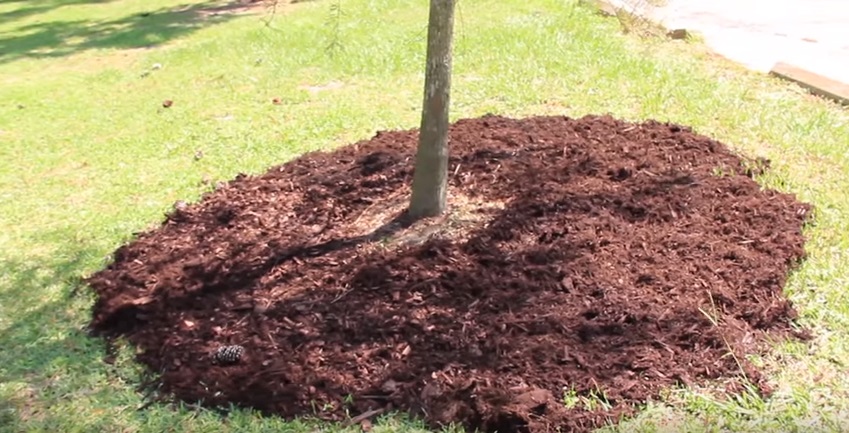 Placing mulch around trees in urban areas provides numerous benefits. Mulching emulates a duff layer, a layer of organic material that accumulates as leaves fall every year in natural forests. Mulch provides organic material to the soil surrounding a tree, which along with microorganisms helps to replenish the nutrients in the soil. An even layer of mulch also helps to regulate soil temperature. It acts as insulation, preventing the soil from freezing during cold periods and preventing excessive water loss from evaporation during warm periods. Grasses and weeds, which often compete with urban trees for nutrients and water, do not grow as quickly when suppressed under a layer of mulch and provide less competition. This allows the trees to more completely utilize the surrounding resources and become established more quickly.

Proper mulch installation is critical for reducing harm to the tree. The layer of mulch should be evenly spread around the tree and should not be more than two inches thick. Thicker layers of mulch can prevent rainwater from infiltrating into the soil, hindering tree establishment. Some people incorrectly pile up the mulch around the base of the tree in a process known as “volcano mulching”. Volcano mulching leads to an accumulation of water in the mulch directly at the base of the tree, prompting the tree’s roots to grow into this space and potentially girdling the tree at its base. Also, mulch piled around the trunk encourages insect and rodent damage to the bark. Instead, evenly distribute mulch over a 3-5 foot diameter area from the trunk or to the “drip line”, or outermost circumference of the tree canopy, and remove any mulch from the 2-4 inch diameter area around the trunk. This allows all of the rain that drips from the trees branches and leaves to be reclaimed by the soil.

Watch the video Mulching Trees in the Urban Environment to learn more. This video is part of a series, Trees for Energy Conservation, developed by the Southern Regional Extension Forestry and Virginia Tech Cooperative Extension with funding provided by a National Urban and Community Forestry Advisory Council grant.