How does what I do in my yard, on my land and in my garden affect what plants invade our forests and grasslands?  What has happened on the land where you live (its history of use), and what you plant now, can have a long-lasting impact. Land use legacies appear to play a large role in the patterns of invasive plants and the impacts they may have. The progression of time shows how well a plant manages to spread, and thus, becomes considered invasive.

Forest Inventory and Analysis (FIA) data in 2015 (U.S. Forest Service) show “39% of forested plots sampled nationwide for invasive plants contained at least one invasive species, revealing that a significant portion of the more than 300 million hectares of U.S. forests have been invaded” (Oswalt et al. 2015). This information is available for all regions (e.g. Southern U.S.) to help gauge forest ecosystem health, the quality of services they provide people (water and air quality for example) and to evaluate forest management practices. 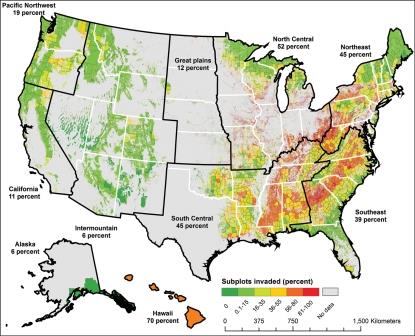 Figure 1. Forest plant invasion intensity (percent of forested plots with an invasive plant recorded for a given county based on FIA sampling) for the United States including estimates of region-wide invasion intensity.

Prevention of the introduction or propagation is the first line of action. Become familiar with the plants that become invasive and do not purchase or plant them. Early detection is key to prevent the road to irreversible change. If you already have invasive plants you cultivate and they are a favorite you choose to keep, be sure to collect and dispose of the seeds, and otherwise keep them under control so they cannot spread beyond where you want them to grow.

Rapid response and steps to eradicate unwanted introductions are easier in the long run than having to manage the complex consequences of invasive plants. If the plant begins to show up in your garden or along margins where you did not plant it or, in your forest or neighborhood, take action to control it and eliminate it from places it is not welcome. Limiting how the plant reproduces (destroy seeds, alter habitats to prevent establishment) is an effective way to restrict spread. Weeding out a small patch of an invasive may save the neighborhood and local parks many hours of work and reduce other impacts, such as on water (e.g. pesticides), wildlife (loss of food species) and costs for management.

Many scientists are looking at what processes influence the scale of invasion and how different species behave.  In some cases, it may be more a question of how a specific species behaves under different conditions, say Berberis (formerly Mahonia) known as barberry or Oregon grape, on one side of the southern Appalachian mountains and the other (Tennessee and North Carolina). Other invasive plants that have been around for some time and are widespread call for a deal of physical effort to rid a site of them. In the Southern US for example, the top two invasive plants are Japanese honeysuckle and privet (Table 1, from Oswalt et al. 2015). The top five listed below for each region are in this category that requires a lot of work to eradicate now that they are so widespread.

Table 1. Top five most inventoried forest invasive plants by the FIA program within each region of the United States (from Oswalt et al. 2015).

Invasive plants are increasingly altering the structure and function of our natural environment. Nonnative plants pose a threat to human well-being due to the negative impacts they have on existing plant communities, species diversity (e.g. pollinators) and wildlife habitat. Concerns differ from region to region. Most information is gathered based on region-specific monitoring lists. You can explore resources about Invasive Species region by region and state by state from the US Fish & Wildlife Service, or the USDA Forest Service and/or contact the Department of Natural Resources in your state. Also, see the additional resources list below.

Control and management recommendations will vary according to individual circumstances. Location, habitat, weather and a variety of other conditions will all be factors which help to determine the best treatment choice. In order to find the safest and most effective treatment for your situation consult your State Land Grant Institution and, if using chemicals, always refer to the product label.

Resources about Invasive Species at Invasive.org